Research Rabbit Holes can be fabulously inspirational, or horribly time wasting. They can take you in directions that are wildly irrelevant to your story, or can help you add layers of authenticity and meaning to your work. In this series of blog posts I’m sharing some of my favourite journeys down these Research Rabbit Holes, and I’ve also asked some other writers about their experiences falling into these diabolical black holes of eternal fascination.

This week’s guest is Nicole Murphy, whose work as an author crosses a range of genres, including contemporary paranormal (the Gadda series), science fiction (the Jorda series), as well as contemporary romance and erotica with a hint of the unusual under the pseudonym Elizabeth Dunk.

Tell me a little bit about your latest book and what sort of research you needed to do to write this story.

Much Ado About Love is an adaptation of Shakespeare’s Much Ado About Nothing, so the
main bit of research was re-reading the play. It was working out the beats in the play, the main plot points, the theme and message of the play and also the characters. Part of this involved re-watching Kenneth Branagh’s version of Much Ado About Nothing – research can be fun! Otherwise, there were little bits of research I had to do for some facts. Eg I went through local council papers to find out how rezoning works. I had to find out how long it would take for a helicopter to get from Bankstown Airport to the south coast of New South Wales (Nowra-ish). Thankfully I based a lot of aspects of this story on places I’d been or things I’d done so it didn’t require too much research.

It depends on the story. For example, in my gadda series, I’m often having to do research prior to the story in order to build the alternate world its set in. Otherwise, if I get it wrong, it can involve huge re-writes and that’s annoying. For the contemporary romances, because so many of them are set in places that I know, or in work situations I’m experienced with, there’s not a lot of research required. In that case, I’ll leave it until the editing phase and hope to blazes I’m not going to discover something that will completely change the story (although I did have to stop to work out the rezoning stuff for Much Ado About Love to make sure what I was thinking would work). Every once in a while, you reach a point in a story where you have to do research to move forward. An example of that was in the third book in my Dream of Asarlai trilogy, Rogue Gadda, where I just couldn’t write the scene I needed to write without knowing exactly where in Boston it was taking place and what the houses in that area looked like. I even needed to find some floor plans of the houses in the area to get an idea of how the inside of the houses would work. As a result I have a deep, abiding love for Google Street View and real estate websites.

Is research a distraction or an inspiration?

Prior to writing – an inspiration. The research I did on Irish mythology for the gadda books really informed a lot of the history and thinking around the world (including the name ‘gadda’, which is taken from the word ‘Dagda’, the name of one of the Irish gods). During writing – definitely a distraction. I like to get started with writing and plough through until the end. I think despite all this time, I have a fear that if I get pulled away from a story, I won’t come back and finish it so I don’t risk it by stopping.

Have you ever researched something that made you abandon a story idea?

There was a point in researching the rezoning stuff for Much Ado About Love that I had a terrible, awful feeling that it wasn’t going to work in the story and I was going to have to rethink everything the antagonist was doing to get at the heroine. It made me sick to the stomach. But then I found a little clause, and realised there was a way around it. You see, generally councils can re-zone an area, but even if that means the wrong type of building ends up on it, the building is not illegal because the correct zoning was in place when it was built. So your block can be rezoned light industrial, but the family home is still safe. It simply means if the people who buy your house wanted to, they could knock your house down and build a factory on the land instead. Doesn’t threaten your building at all, so rezoning in itself wouldn’t cause a problem for my heroine. However, further digging showed if (for example) your family home wasn’t built on the correct zone in the first place or wasn’t properly approved, it becomes an illegal dwelling. At that point, I just had her grandfather forget to fill in some paperwork a few decades ago and hey presto – her livelihood and home are at risk. Phew!

What was the weirdest thing you had to research?

My favourite research story was for a scene for one of the gadda books that didn’t actually end up in print (although a version ended up in a short story). The gadda needed to touch something that contained evil that could contaminate them so couldn’t do it with bare skin. They couldn’t use their power either – it had to be a man-made thing that protected them. No gloves around, so they wrapped their hands in Glad Wrap. To find out if it worked, I did it to myself. I worked out you really do need another person to  wrap your hands in Glad Wrap and make it work but if done properly, you can make a Glad Wrap glove that will enable you to still use your hand while protecting your skin. Got some interesting looks from the husband that day.

Much Ado About Love 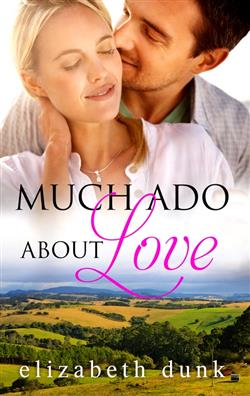 Trix Leon and Ben Anthony have two things in common—they don’t believe in love and, together, they set the sheets on fire. Their relationship is safe, uncomplicated, and just what they both need—until John Aragorn shows up and gives them a third thing in common: an enemy.

When their friends decide it’s time for Trix and Ben to admit to themselves—and each other—how they really feel, Trix and Ben are caught in a whirlwind of emotion, a promise of something more. But Aragorn is determined to destroy everything: Trix’s hard work, her future, and her chance at something more with Ben.

Now Ben and Trix are left fighting for the one thing that neither of them knew they wanted: love.

Nicole Murphy is a writer, editor and teacher who writes contemporary romance as Elizabeth Dunk. Much Ado About Love is her tenth publication. Follow Nicole at her website (www.nicolermurphy.com), on Twitter (@nicole_r_murphy) or on Facebook (Nicole Murphy & Elizabeth Dunk – Author).