Last Saturday was a whirlwind of genre fiction goodness. First up I spent the afternoon at the launch of Ian McHugh’s award-nominated collection Angel Dust. His stories range from whimsical fantasy about turning fairies into wishes right through to one of the most fascinating and memorable sci-fi stories I’ve read, which interrogates how our assumptions might hamper our ability to understand and relate to an alien species. You should get it and read it. It’s awesome. 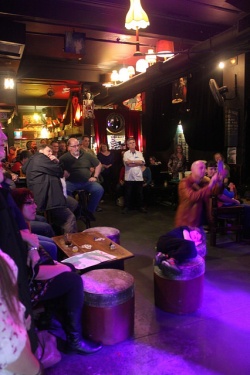 After that, I headed home for a nice cup of tea with the eternally energetic Nicole Murphy, which provided a much needed breather before the evening’s entertainment kicked off: the 2014 Aurealis Awards!

This year, as president of the CSFG, I was invited to present the awards for best collection and best anthology. I had the very great pleasure of being able to hand over the former to the formidable writing team that is Angela Slatter and Lisa L Hannet for their collection, The Female Factory; and the latter to Garth Nix, who was collecting on behalf of Alisa Krasnostein and Julia Rios, for their anthology Kaleidoscope: Diverse YA Science Fiction and Fantasy Stories.

Seeing as it was also the 20th anniversary of the awards, we were encouraged to get into the spirit by donning 90s clothing. My effort was limited to digging out from the back of my cupboard a pair of boots I bought in 1992 (covered in approximately 20 years of dust and cobwebs) and teaming these up with a felt fedora and a pair of big hoopy earrings. But some people went to quite a bit of effort…

It was a great night, and I really hope I can go next year when it will be in a location yet to be disclosed, but probably not Canberra. Check out the full list of nominees and winners over on the Aurealis Awards blog.

All photos courtesy of Cat Sparks